“Action! Tell me a story about MAB” 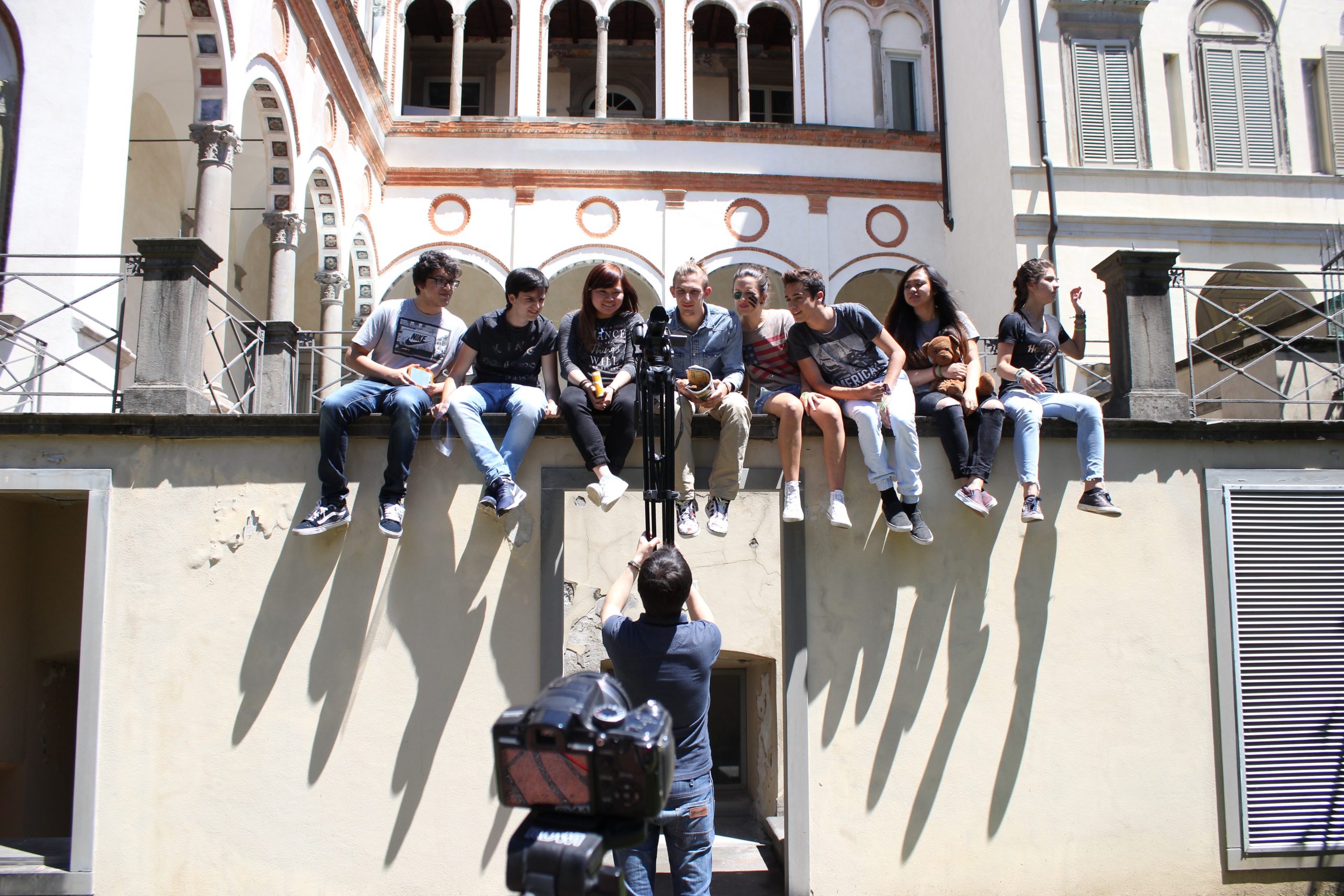 Background
The “Adriano Bernareggi” Museum of religious art (its collections include liturgical objects, images of worship, decorative fragments, portraits and wooden sculptures) reflects Bergamo’s culture from the XVI to the XIX century.
The pilot project “Action! Tell me a story about MAB” was developed in the framework of “YEAD – Young European (Cultural) Audience Development”,  a four-year project supported by the “Creative Europe” programme of the European Union (2015-2019).
More in particular, the museum was involved in YEAD – Year 1 (2015-2016), devoted to the theme “Universal Access to Culture”, whose overarching goals were:
• to reach underrepresented audiences and improve access to cultural institutions and creative works in the EU and beyond by fostering creative partnerships between cultural and creative players (museum professionals and young filmmakers)
• to provide European museum professionals and filmmakers with skills, competences and know-how needed to engage and develop young audiences through innovative approaches in the field of heritage education in an intercultural perspective.

Partners
• Project leader: Fondazione “Adriano Bernareggi”, Bergamo (working team: one museum educator and one film-maker)
• YEAD project partner: Fondazione Ismu – Initiatives and studies on multiethnicity, Milan (YEAD coordinator for Italy)
• Local project partners: Migrations Office of the Diocese of Bergamo; “Ruah”, a local cooperative whose activities – from job placement to training courses on intercultural dialogue issues – are aimed at the social inclusion of citizens with both an Italian and a migrant background.

Funding bodies
As part of YEAD, “Action! Tell me a story about MAB” was co-funded by the “Creative Europe” programme and Fondazione Ismu.

Goals
For young participants:
• to get to know and familiarise with local history and the artistic heritage of the Diocese of Bergamo
• to develop a new awareness of the museum as a resource for reflection, self-questioning, recognition, (self-)representation, interaction and personal growth
• to develop a new sense of respect for and belonging to the local heritage, whether in the museum or outside its walls
• to  develop new relational skills and behaviours (e.g. mutual learning, the ability to question one’s own points of view and to challenge stereotypes, an attitude for listening) through team work
• to learn and master the basic skills and techniques of film-making.

For the museum:
• to initiate a new relationship with an under-represented audience (young people) by facilitating new connections and triggering new resonances with museum collections, also through the creative use of film-making
• to acknowledge young participants as “actors” and “creators” fully involved in the museum’s life, rather than simple “users”
• to identify and experiment with new interpretation strategies
• to explore the creative and communication potential of film-making as a vehicle to actively involve young participants
• to create a network of local partners already engaged in the social and cultural domains, with a view to designing and implementing new collaborative projects.

Target groups
9 youths aged 17-24, both Italian and with a migrant background.

Project description
1. MAB took part in the intensive training workshop (Milan and Turin, November 2015, see programme) addressed to the Italian and French groups of museum professionals and young film-makers involved in YEAD. The aim was to provide workshop participants with new skills, competences and know-how to reach cross-cultural audiences, with a particular focus on underrepresented groups and individuals (mostly youths with a migrant background), as well as to share and discuss guidelines which would help develop new pilot projects in the French and Italian museums involved.

3. Workshop meetings (May-July2016) – engaging young participants in a dialogue with museum staff, spaces, collections and objects in stores:
• phase I: knowing each other and introducing the project, exploring the museum, introducing film language, audiovisual devices, basic film-making techniques (shooting, acting, directing) and carrying out brief exercises with smartphones
• phase II: focus on two particular exhibition spaces:  the room devoted to ex voto (votive offerings to a saint or to a divinity in gratitude or in fulfillment of a vow), exploring the concepts of gratitude and thanksgiving; the room devoted to the iconography of saints, reflecting on symbolic objects and the life stories they represent, and realising that also personal objects have stories to tell, no less important than the stories told by museum objects
• phase III: production of the short film “Museum Encounters”; in the final scene, participants express their gratitude for the experience lived in the museum by creating a “video ex voto”, and by placing it next to the other ex voto on display in the exhibition spaces.

4. Formative and summative evaluation (for the evaluation strategies and tools as a whole, see YEAD – Year 1 project description):
• before starting the pilot project, MAB designed a short questionnaire to gather information on young participants’ expectations, needs, previous cultural experiences and perception of museums
• halfway through the project, MAB asked participants to fill in another short questionnaire aimed at monitoring shifts in perception of the museum and at identifying the most appreciated aspects of the pilot project
• together with MUDEC and MUST, the “Adriano Bernareggi” Museum took part in two collective meetings organised by Fondazione  ISMU (February and May 2016) to carry out formative evaluation of the work in progress, identify critical hurdles and suggest remedial action if needed; moreover, Fondazione Ismu constantly acted as a “facilitator/mentor” of MAB’s working team through individual meetings, Skype conversations and e-mail exchanges
• a formative evaluation session was also organised in Paris (June 206), so that the Italian and French groups could share, discuss and improve their work in progress
• as for summative evaluation, Fondazione Ismu designed two questionnaires, one aimed at museum operators and film-makers, the other at the young participants of pilot projects.

Lessons to be learned
From the museum’s point of view, the pilot project had a significant impact in terms of:
• raising the awareness of the institution as a whole on the importance of projects addressing “new audiences”
• creating new strategic partnerships with local actors, also with a view to designing and implementing future projects together
• professional and personal growth of the working team
• the effectiveness of filmmaking as a vehicle to actively involve young people, e.g. by overcoming linguistic and emotional barriers
• the continued “exposure” to museum objects, spaces and staff as a way to encourage young participants’ self-expression and meaning making, as well as to trigger a new sense of belonging
• the potential impact of the short film created by young participants on their peers and on the ways in which they perceive museums
• team work as a practical opportunity for young participants to become aware of and exchange different points of view.

On the other hand, the working team had to address key critical issues such as:
• the lack of previous experience in running complex participatory projects
• the tight schedule for completing the workshop activities and producing the video.

Youths aged 16-20, both Italian and with a migrant background