“The written word as a space of encounter” (YEAD 3: Migrant audiences: Ex/Inclusion) 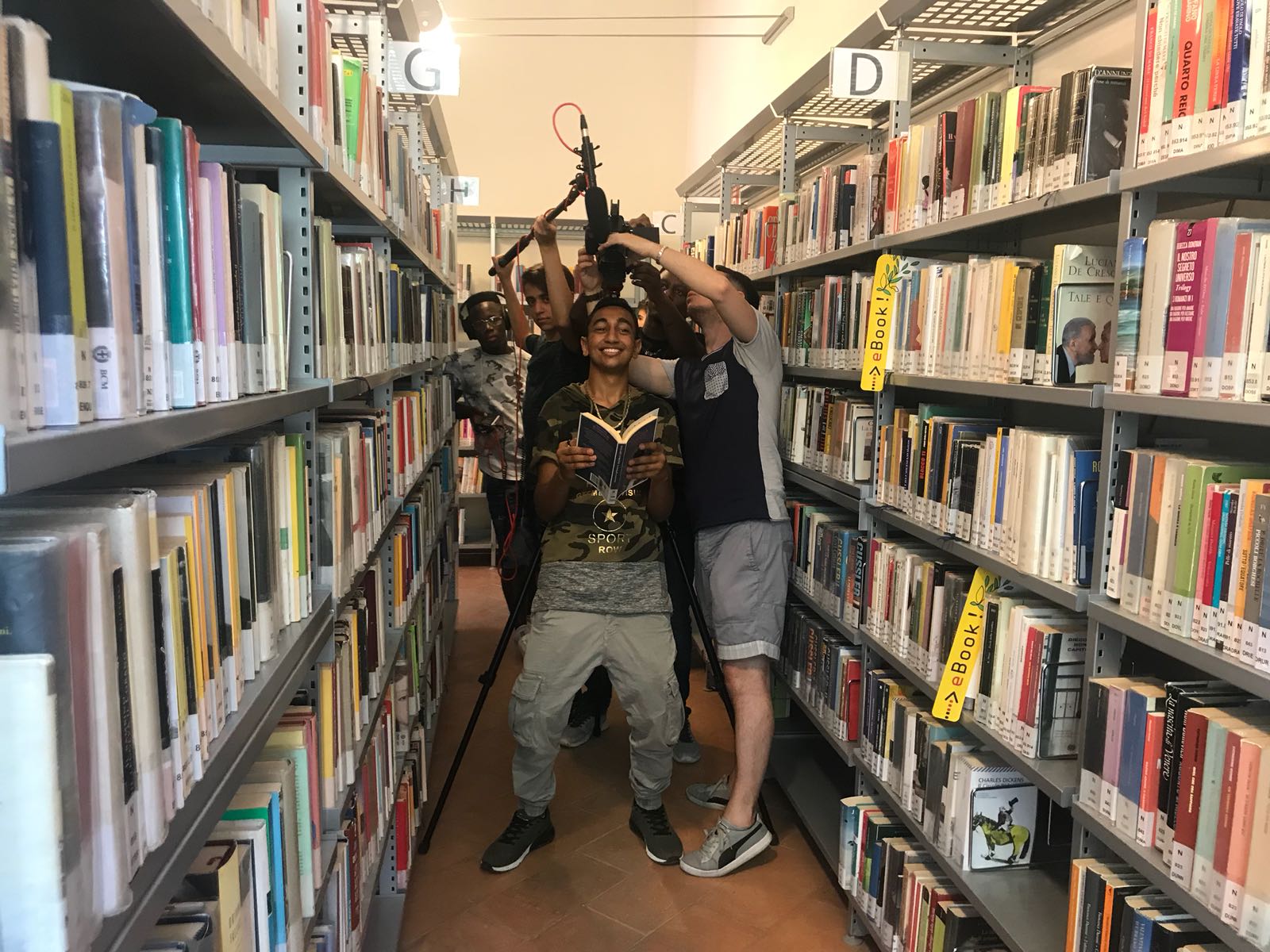 In parallel with the actions carried out by the “working duets”, the other four European partners run smaller, local workshops resulting in the creation of videos devoted to the year’s theme.
In Year 3, this was the case with Fondazione Ismu, which ran the local workshop “The written word as a space of encounter” in partnership with the Affori City Library (Milan).

Project description
The workshop “The written word as a space of encounter” took place within the framework of YEAD – Year 3, devoted to the theme “Migrant audiences: Ex/Inclusion”.
Through activities in the library spaces, a workshop on poetry, video-interviews and film-making, young participants explored and documented in a video the intersections between their personal experiences, literary heritages, and poetic creations.

The workshop:
• had an overall duration of 27 hours, from May to July 2018
• took place at the Affori City Library and in the surrounding park
• resulted in the production by young participants of poetic creations and a short video
• was run by Fondazione Ismu tutors, a professional film-maker (already involved in YEAD – Year 1 and Year 2) and a writer, in collaboration with the staff of the Library and the “Sheb Sheb” Association (working with unaccompanied minors).

More in particular, the workshop was structured in the following activities:
• familiarising with the Affori Library, which involved: getting to know its cultural and social functions, staff and users through short video-interviews; a visit to the fiction, poetry and travel sections; an overview of the authors from young participants’ countries of origin represented on the library’s bookshelves
• film-making exercises in the library and in the surrounding park, training with camera and recording devices in small groups, in order to get closer to the language of film-making
• poetry workshop (4 meetings), which included: the “Poetic name” – Transforming one’s own name into words and images; creating calligrams from poems; creating poems with the caviardage method; individual and collective elaboration of poems around the theme of travelling; “poems in stripes“ – reinventing the poem Every day by Gezim Hajdari. Throughout the workshop meetings, participants used film-making to re-elaborate their experience also in visual form
• translating the poetic word into a storyboard: some of the poems written by participants were chosen in order to create storyboards  in small groups, tutored by the film-maker
• transforming the storyboard into a video: participants identified locations and experimented with different roles (director, sound engineer, etc.) while shooting the short videos drawn from the storyboards, always tutored by the film-maker
• the flashmob “M’includo d’immenso” (paraphrase from a poem by the Italian poet Giuseppe Ungaretti) was meant to actually include the poems created by young participants in the literary heritage preserved in the library: they were printed on cards and bookmarks, and placed by participants inside the books on the library shelves, so that library users will be able to find them in the months and years to come
• production of the final video.

Outputs and outcomes were presented in a final event featuring a public reading of the poems created by participants, musical interludes and the screening of the final video (Biblioteca Affori, 26 ottobre 2018, see programme).

Outputs
• video “M’includo d’immenso”
• poems created by young participants throughout the workshop, printed on cards and bookmarks, and placed inside the books on the library shelves

Lessons to be learned: strengths
For young participants:
• all young participants involved judged the experience lived throughout the workshop “very positively” or “positively”; the most valued aspects of the experience were being actually involved in a cultural project (not as passive “users/consumers”), working in a team and getting to know new people, learning new competencies and skills, working with cultural operators (from Fondazione Ismu and the library), the writer and the filmmaker, feeling welcome in a place they thought was not “for them”
• literary heritage was widely perceived by young participants as something close to their lives, and poetry as a creative form which enabled them to express their feelings and lived experiences
• all young participants expressed a desire to be involved in other cultural activities, and most of them claimed they are willing to visit other cultural institutions; the most significant expression of this positive perception of cultural institutions came from an unaccompanied minor, who wrote he wished to visit other cultural institutions with relatives and friends because «I do not want to learn about the good things in life on my own»
• the workshop was also perceived as a significant opportunity to fight stereotypes and racism
• at the end of the one-day seminar, in which the poetic creations of young participants were recited by adult readers in front of a large audience, many of them said they would never have expected to see their work valorised to this degree, and feel so proud of it.

For the working team:
• young participants’ attendance, their active involvement and enthusiasm throughout the workshop (in particular on the part of unaccompanied minors) exceeded all expectations, notwithstanding the number and timing of workshop meetings, which was particularly demanding at the end of the school year
• Biblioteca Affori Library particularly valued the contact established with a brand new audience; quite a few participants from the “Sheb Sheb” Association became library members, and some came back during the summer to borrow books
• all the operators involved acknowledged the inclusive potential of poetry as a powerful means of self-reflection and self-expression for youths
• the strong motivation of project partners was one of the key success factors of the workshop: the Affori Library because of its interest in developing new audiences (teenagers; youths with a migrant background), the “Sheb Sheb” Association because of its interest in exploring cultural heritage as a new context for the empowerment, participation and inclusion of unaccompanied minors.

Lessons to be learned: critical hurdles
For young participants:
• the little time available to get to know the Library’s heritage in more depth, and thereby to establish a closer connection between literary/poetry activities and film-making
• the difficulties met in turning their poetic creations into moving images.

For the working team:
• The main critical hurdle was represented by the little time available to work in depth on the literary heritage preserved in the Library, and more in particular on “founding/classical” texts from the countries of origin of project participants (as was originally planned). The issue of time seems to confirm what was observed in the context of YEAD – Year 2, i.e. that for a cultural institution (a library, in this case) to create a meaningful, “generative” connection with its young audience (or non-audience, in most cases), there clearly are some prerequisites which could hardly be met with the small scope of this year and last year’s activities: a long-term work, a continued “exposure” of young people to the Library’s literary heritage, a truly collaborative meaning-making process concerning poems and literary works, the idea of what a library stands for, its relevance and value for young people.
• Another key critical issue resulted from Fondazione Ismu’s choice to work in collaboration with a library, rather than with a museum, so as to address a different kind of heritage. This meant venturing into uncharted territory, which turned out to be rich in possibilities but also implied not always being able to give a coherent response to challenges such as: how to “translate” the poetic creations of young participants into moving images?