“A heritage for all”. Towards an inclusive mediation of cultural heritage and civic memory 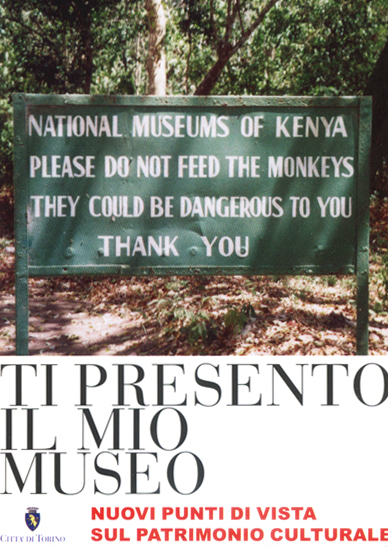 Partners
· City of Turin – Department of Cultural Heritage Education (leading partner)
· a group of local Centres for Adult Education and Training
· University of Turin – Department of Cultural Economics
· “Holden Art – Formule di narrazione” (a local organisation devoted to exploring the potential of story-telling applied to museums and other heritage institutions).

Goals
· to carry out research on immigrant communities’ participation patterns in the city’s cultural life
· to increase the intercultural competence of museum educators through training opportunities
· to experiment with story-telling and other forms of active involvement of immigrant communities in structuring museum visits and interpreting collections
· to promote and sustain the cultural participation of “new citizens”.

Project description
In 2004 the City of Turin set up a Department of Cultural Heritage Education, which is strongly committed to exploring new models of accessibility, cultural inclusion and intercultural communication in museums. In this framework, the three-year programme “A heritage for all” was launched in close cooperation with a group of centres for adult education and other local partners.
In the first two years of the programme (2005-2006), a survey on the cultural participation patterns of “new citizens” was carried out, a series of focus groups with migrant associations organised, and the first experimentations with story-telling in a museum setting started (e.g. on the occasion of two temporary exhibitions devoted to national liberation movements – in Warsaw and in Turin – at the Museo Diffuso della Resistenza).
Most importantly, the Department of Cultural Heritage Education became a partner in the training project “Museums Tell Many Stories” (2005-2007), financed by the European Commission programme Socrates Grundtvig 2 and coordinated by the Istituto Beni Culturali della Regione Emilia Romagna (Cultural Heritage Institute of the Emilia Romagna Region). Other partners in the project were Engage (UK), Imagine IC (NL) and the Chester Beatty Library in Dublin. The idea behind MTMS was to develop ways of looking at the “cultures” represented in museum collections from different points of view and perspectives, and to involve audiences in the co-production of meanings through theatrical techniques, story-telling and other interpretation methodologies. This training opportunity was addressed to the education staff of museums involved by the project’s partners, and aimed at increasing their intercultural competence. In Turin’s case, participation took place in the framework of “A heritage for all” programme, and  led to the development of pilot projects for a greater involvement of migrant communities in the interpretation of collections at the Fondazione Accorsi – Museo di Arti Decorative (“Objects, fragments of culture”) and at the Egyptian Museum (“The Egyptian Museum for Foreigners”).
In its third year (2007), “A heritage for all” programme kept supporting local museums involved in the MTMS training project, including Fondazione Sandretto Re Rebaudengo’s pilot project “A vision of my own” (completed in April 2008); it organised a cycle of public events entitled “Ti presento il mio museo. Nuovi punti di vista sul patrimonio culturale” (“Let me introduce you to my museum. New points of view on cultural heritage”), where Turin’s “new citizens” were invited to remember and share “their” tangible/intangible heritage at home as well as in Turin; and it helped the group of immigrants who took part in the 2006 focus groups to draft a document to be presented to the City Council with proposals to increase the accessibility of local museums.

Soon after MTMS was completed, the Department of Cultural Heritage Education was involved as a partner in a new European project, “MAP for ID – Museums as Places for Intercultural Dialogue” (2008-2009), once again coordinated by the Cultural Heritage Institute of Regione Emilia Romagna and currently in its early stages. This European partnership project, supported by the Lifelong Learning Programme of the European Union, aims to develop the potential and practice of museums as places of intercultural dialogue and to promote a more active engagement with the communities they serve. Within this framework, the Department of Cultural Heritage Education has launched a call for proposals in May 2008, addressed to Piemonte’s museums wishing to carry out pilot projects exploring new, inclusive ways of mediating their collections. Seven local projects have been selected, and will be implemented between September 2008 and May 2009.

Lessons to be learned
“A heritage for all” is a clear example of how the most interesting cultural programmes and pilot projects to foster intercultural dialogue in Italy are often being undertaken at the local level, through the initiative of particular configurations of local authorities, cultural and non-governmental institutions, and civil society.
The programme laid the foundations for a sound, continued partnership between the city administration, local museums, agencies for adult education and immigrant associations, all working towards shared goals and with a common methodology.
Networking at the European level has also been a key factor of success and sustainability.
Within the framework of “A heritage for all”, the first survey ever carried out in Italy on museum attendance patterns of migrant communities, along with the focus groups and the joint document signed by the “new citizens” who took part in the project, provided a sound base for identifying, discussing and articulating the needs and interests of these communities to create a culturally inclusive approach to the mediation and interpretation of collections.
The programme has recognised the need for a long-term work and commitment with (rather than for) audiences, who were actively engaged and given a real opportunity of self-representation.
The main critical point has been identified in the difficulty to reach beyond the education departments of the museums involved, confirming how one of the crucial challenges for similar programmes and activities in the future will be to build an intercultural attitude and competence into the museum’s institutional fabric as a whole.