“Twelve storytellers in search of an author” 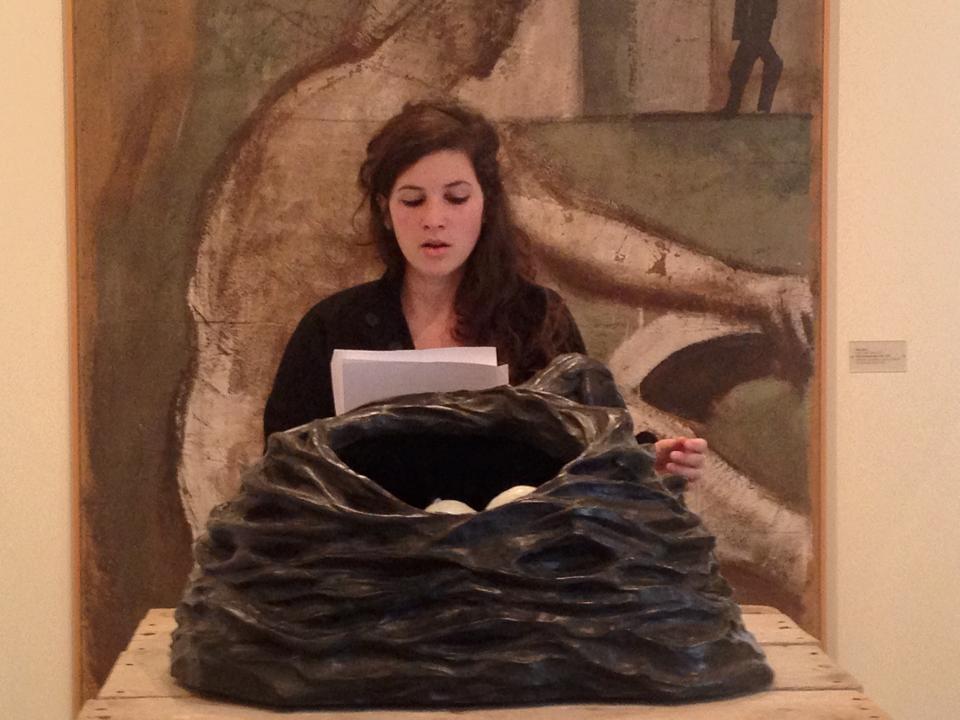 Background
In the early 2000s, the Gallery for Modern and Contemporary Art (GAMeC) of Bergamo started to address the issue of migrants’ cultural participation (see for example the “Guests of honour” project).
Since 2007, it has been actively involving museum mediators with a migrant background in the interpretation of its permanent collections and temporary exhibitions. The first training course addressed to mediators as “new interpreters” of the museum’s heritage – an initiative deliberately qualified as “cultural” rather than “social” from the very start, which led to the creation of a permanent group of 31 mediators –  was followed by continued opportunities for professional growth, often shared with GAMeC’s educators and aimed at the development of specific planning, operational and relational skills. Over time, the role of mediators shifted from acting as bridges between their respective communities and the museum through visits in their mother tongue to engaging diverse audiences (migrants from different backgrounds, Italian museum-goers and non-visitors, school and university students, teachers, disabled people, inmates, foreign tourists) in intercultural activities.
The active involvement of mediators in planning public programmes and activities is today a constant feature of the museum’s cultural policy.

Goals
• to promote new points of view on the Permanent Collection, by acknowledging storytelling as a crucial tool to convey emotions and lived experiences alongside art-historical contents, and to help all individuals (whether visitors or non-visitors) to approach cultural heritage in a way that gets them personally involved
• to foster the active participation of younger generations (and, more specifically, young film-makers), by encouraging cross-fertilisation between “narrative” and “creative” perspectives on collections (the narrative trails developed by museum mediators and the videos produced by NABA students)
• to increase the opportunities for disseminating museum mediators’ work to a wider audience, as well as to first and second-generation migrants, also through the museum website and social networks.

Project description
The project involved twelve GAMeC mediators in a storytelling workshop led by Maria Grazia Panigada, expert in theatre and storytelling techniques applied to cultural heritage mediation. Panigada had already worked with a wider group of mediators in an earlier training course at GAMeC (2011), and developed a specific expertise in storytelling applied to museum contexts by taking part in groundbreaking projects such as “TAM TAM – The Museum for All” (Museum of Peoples and Cultures, Milan, 2011-2012) and “Brera: another story” (Brera National Picture Gallery, Milan, 2012-2014), which provided a sound methodological framework for the design and implementation of “Twelve storytellers in search of an author”.  Brera’s project, in turn, had been inspired by GAMeC’s previous experience with actively involving mediators in the museum’s interpretation strategies, which shows how the generative potential of these experimental strands of practice can be tapped into.
The workshop resulted in the creation of twelve narrative trails, performed both in Italian and in the mediators’ mother tongue; each one of these stories is connected with an artwork from the Permanent Collection, and interweaves art-historical contents with personal autobiographies in a way that encourages listeners/visitors to approach works of art from a new perspective.
Following the storytelling workshop with mediators, the performance of the narrative trails was filmed (these videos are available on GAMeC YouTube Channel as well as in the “Video” section of this website) and in turn re-interpreted by NABA students with original videos of their own.
All the videos produced are meant to create new connections between GAMeC and a diverse audience –  in terms both of age groups and cultural/educational background – by breaking language barriers (the narrative trails cover most of the languages spoken in major migrant communities living in Bergamo: Farsi, Hungarian, Japanese, Portuguese, Russian…) as well as cultural barriers.

Lessons to be learned
The project showed how, thanks to storytelling, a museum can overcome its self-referential language, often elitist and based on scientific expertise only.
It also helped mediators develop and reinforce their professional, organisational and relational skills, and created new opportunities, formats and channels (videos, social networks) for their work to be known and appreciated by a wider audience.
Their diverse backgrounds, knowledge systems and insights provided new keys to the interpretation of collections, adding to the  complexity and richness of meanings “hidden” in each work of art, and waiting to be unveiled.

On the other hand, the little time available for the storytelling workshop to unfold and the narrative trails to be developed (2 months only) did not allow mediators to delve into their stories and improve their “performing” dimension, which, as other storytelling projects show (see for example “Brera: another story”), requires a lot of effort and guidance.
In some cases, the shooting phase required mediators to condense their narrative trails in a way which deprived them of their “natural” unfolding as stories told in presence of a real audience.