“Animals in heaven and earth”: discovering African myths and legends 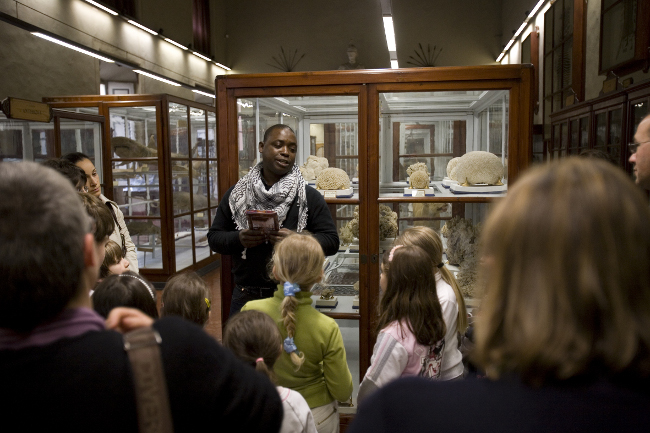 Partners
· Leading partners: Museum of Natural History of the University of Parma; Googol Cultural Association for the Public Understanding of Science
· Other partners: Parma City Libraries

Funding bodies
European funding (Grundtvig project “MAP for ID – Museums as Places for Intercultural Dialogue”) plus the Museum’s own budget and funds allocated by the Ministry of Education, University and Research.

Goals
· to facilitate Parma’s citizens of African origin to become chief protagonists in the reinterpretation of museum collections (the Museum comprises a rich collection of African animals from Eritrea and Congo) and constellations, by actively involving them in a comparison between African and European cosmology
· to explore new forms of interaction and dialogue with African communities through the discovery and recognition of their living heritage (in particular, oral traditions)
· to train African storytellers to have an awareness and understanding of the museum and Googol’s programmes and activities
· to explore themes connected with astronomy, ecology, biological evolution and animal behaviour in order to help all citizens, young people in particular, to know and respect nature and diversity.

Project description
“Animals in heaven and earth” is one of the 30 pilot projects supported and implemented in the framework of the Grundtvig project “MAP for ID – Museums as Places for Intercultural Dialogue”.
The project began with a one-day conference presenting “Animals in heaven and earth” to the city. Two meetings targeted at schools, plus an evening event open to the whole city were held in the Great Hall of the University. Speakers included Thebe Medupe, an astronomer from South Africa, and the poet Cleophas Dioma, who lives in Parma and described through his poetry the immigrant’s difficulties in becoming an integral part of society.
In the following months, the complex process of participants’ involvement began. The original idea, based on formal contact with local African community associations, proved difficult to implement. Project partners, therefore, focused their efforts on establishing personal contacts through the mediation of external facilitators (among whom was Cleophas Dioma, creator of the local festival “African October”).
About ten people from Burkina Faso, Senegal, Côte d’Ivoire, Ethiopia and Cameroun actively took part in the project. Some had been teachers or artists in their respective countries, but now worked in unskilled jobs in Parma. Working group meetings and several visits to the museum gave rise to memories which led to the collection and transcription of tales and legends in a booklet. This publication was distributed to schools and the general audience at the final events, together with an annotated bibliography edited by the City Libraries of Parma.
Four conclusive days were held at the museum, where Googol mobile Planetarium was mounted: the meetings, open to students and all citizens, were run by the African storytellers, who took on the role of museum guide and fascinated the audience by conveying the myths and traditions of their countries of origin.

Results / lessons to be learned
Among the most significant outcomes of the project were:
· exploration and validation of the knowledge and experience of African participants, with an extraordinary impact on the audience and development of new competencies in the museum staff
· the motivation and training of a group of new citizens, who may now become interpreters and mediators of the museum
· the opportunity for the museum to reach a wider audience and to make its collections come alive through new perspectives and interpretations
· the chance for everybody to challenge their own assumptions through the observation of the stars from different parts of the world and the reflection on the similarities and differences of points of view.

The project team also met some difficulties: the focus on interpersonal relationships with the many people who took part in the project was very time-consuming in terms of planning, organisation of meetings and production of materials.

From the partners’ point of view, the connection between people and institutions promoted in the project’s framework ‘enriched everyone, but should find a permanent space in order not to be wasted,’ for example by creating new training opportunities for mediators.

- of the participatory planning process: adult citizens from the local African communities
- of the booklet with legends and the final events: schools, families, communities with an immigrant background, general audience