“At the museum with…” 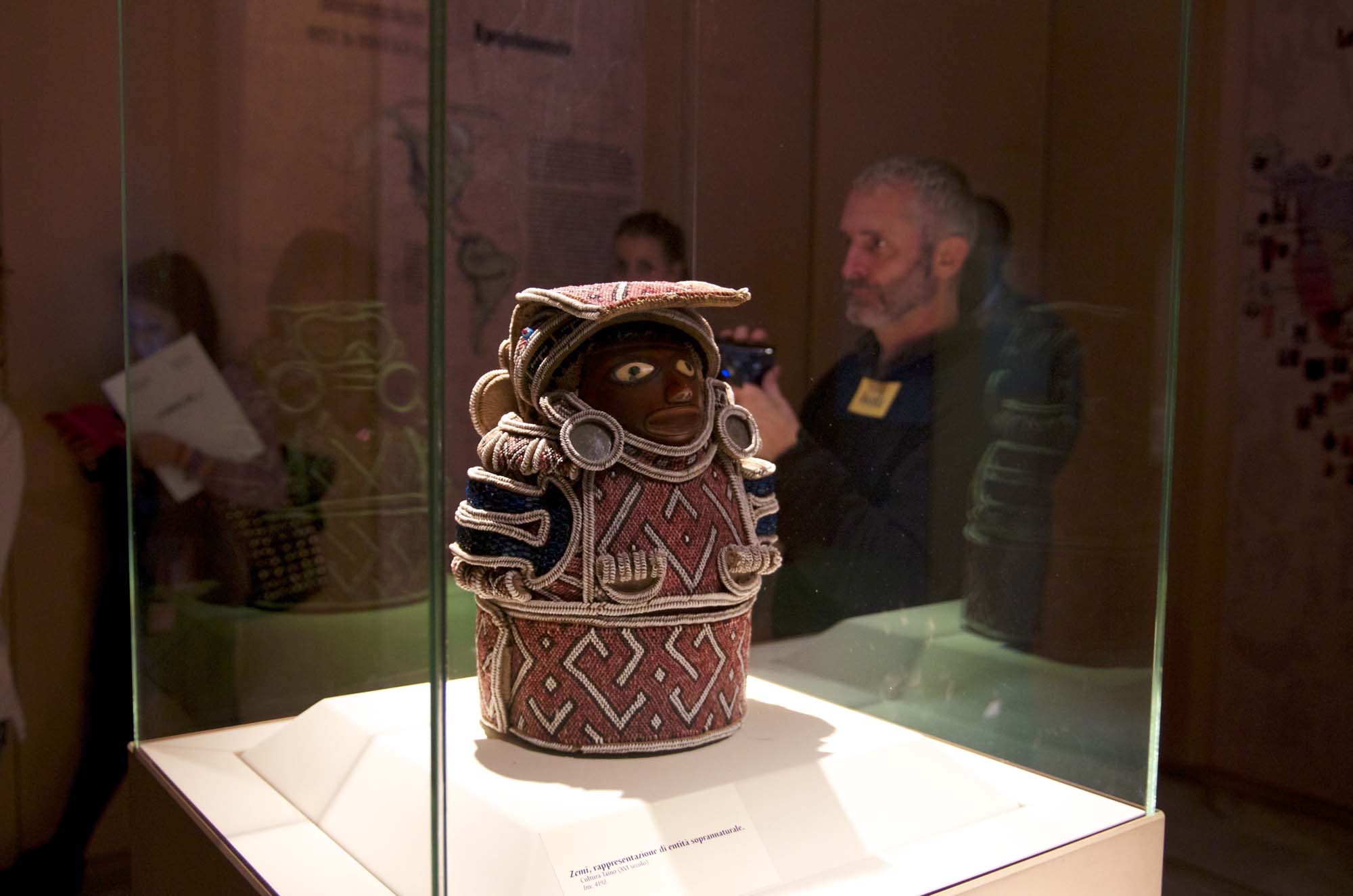 Background
“At the museum with…” builds on the expertise developed by the Pigorini Museum through the “READ-ME 1” (Réseau européen des Associations de Diasporas & Musées d’Ethnographie) and “[S]oggetti Migranti – Migrant subjects/objects” projects, and in fact may be seen as an effort on the part of the Museum to revive its dialogue with diasporas living in Rome by further developing the following methodological choices: 1) a focus on participation to enhance the museum’s ability to listen to its audiences, 2) the central role of workshop practices in building the contemporary value and relevance of cultural heritage, 3) the importance of storytelling as a tool to improve access of new audiences and participation.

Funding bodies
The project was funded by the Ministry for Heritage, Cultural Activities and Tourism in the framework of the call for proposals “Promoting innovative forms of  cultural participation”.

Goals
• to strengthen the relationship between the Pigorini Museum, MNAO and their audiences – with a particular focus on marginalised and excluded groups – through participatory practices
• to explore innovative methodologies and tools for conveying museum contents (as an alternative to traditional guided tours)
• to increase forms of active participation and citizenship through a new acknowledgement of the role of museums and cultural heritage as vehicles not only of belonging, but also of dialogue and understanding
• to promote an exchange of expertise and methodological approaches between professionals working in museums, schools, universities and organisations promoting the rights of marginalised groups.

Target groups
Alongside migrants and refugees, the project was addressed to a variety of groups: primary and secondary school students, university students, experts, artists, families, people with hearing impairments.

Project description
“At the museum with” started in May/June 2013 with a survey of needs of the identified target groups and with brainstorming activities with project partners aimed at defining methodologies and working phases more in detail.
Between October 2013 and January 2014, twelve workshops (six for each museum) led by experts in storytelling and creative writing were held as a preliminary step for the development of narrative trails. Following a presentation by curators of objects from the permanent collections, participants (in our case, migrants and refugees) were invited to come up with ideas in the form of personal stories, thoughts and insights for an immersive tour through the exhibitions spaces of the two Museums (see photographic documentation on http://www.almuseocon.beniculturali.it/index.php/gallery/foto). A kota reliquary from the African collections of the Pigorini Museum, for instance, provided one of the storytellers with the opportunity to tell a story about his childhood and to introduce the themes of mystery, the unknown and the relationship with ancestors.

Although intended to address different groups and needs (see “Target groups”), all the workshops shared a common structure: 1) an expert introduced some objects of the Museum, connected with a marco-theme; 2) participants wrote or told personal stories “triggered” by the encounter with the objects; 3) the stories  were shared and analysed by the project team.
In February/March 2014, the stories stemming from the workshops were further developed to finalise a “script” made of audio/video interviews and other multimedia contents (intended as educational aids to go with the narrative trails).
The trails were developed between February and June 2014 in the following steps:
• production and post-production of narrative clips: the storytellers involved recorded short clips of their stories at the studios of a school of cinema (Istituto Istruzione Superiore “Roberto Rossellini”) with the professional assistance of teachers and students
• production and organisation of texts, pictures, drawings and videos for an in-depth analysis of objects and themes: museum curators and other members of the project team prepared extra contents for consultation during the visit
• production of the web application “At the museum with”, organised in six narrative trails: “Asia in harmony”, “My Islam”, “Return to Tibet” at the MNAO; “The sign and the word”, “Secret Worlds”, “Questions of death, questions of life” at the Pigorini Museum. Once the application is downloaded  on tablets made available for free at the reception desks of the two museums, the visitor is able to explore the exhibition spaces at his/her own pace, by pointing the tablets on ad-hoc markers. This  product differs from the many applications of so-called “augmented reality” in museum contexts, in that its contents are not “stored” in the web (and therefore accessible also outside the museum), but the character guiding the visitor is “summoned” on the tablet’s screen only in specific spots of the exhibition spaces: in other words, multimedia technologies were exploited to address the need for a “live”, immersive and contextual experience, avoiding the risk of distracting the visitors’ attention away from the objects on display.
The narrative trails and web application were launched in July 2014.

Lessons to be learned
• Through storytelling and the “storycircle” methodology, already employed in other European project (see for example “DIAMOND – The museum as a space for dialogue and collaborative meaning-making”), the traditional forms of museum representation were enhanced so as to allow cultural heritage to be questioned and rediscovered by individuals who breathe new life into it.
• The active participation of target groups triggered a process of collaborative meaning-making and dialogue between professionals and “non experts”, who rarely find opportunities and common spaces to share their perspectives, thereby promoting a more democratic and inclusive access to the museum.
• The fruitful cooperation between internal and external expertise allowed project partners to tap into a diverse range of knowledge systems, competencies and skills.
• Storytelling was a key tool to involve migrants and other audiences from an emotional point of view, include new voices and narratives in interpretation and display, and promote access to heritage in an intercultural perspective.

Given its highly experimental nature, the project also presented some rather problematic aspects, and more in particular:
• the difficulty to find the right balance between curatorial expertise and autobiographical storytelling
• the huge effort constantly needed to negotiate the different visions, priorities and expectations of curators, storytelling experts and technologists
• the difficulty to make the application more “dynamic” in terms both of content and use (for example, the unavailability of a Wi-Fi connection in the exhibition spaces of both museums hindered visitors from giving their feedback, and the project team from analysing the timing and choices of visitors).