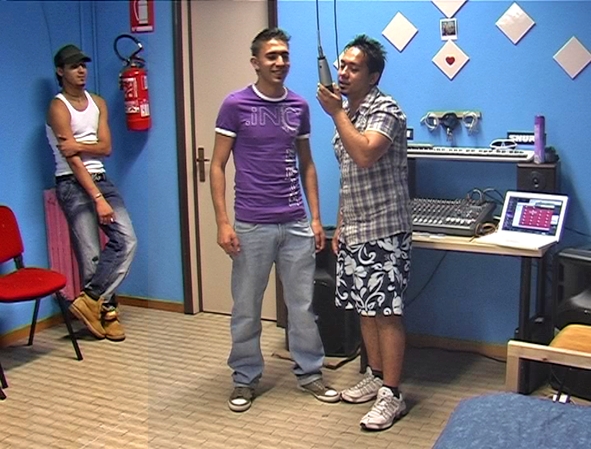 Goals
“City Telling” was jointly developed by the Education Departments of MAMbo and the Sandretto Re Rebaudengo Foundation in Turin (see FSRR’s pilot project). The main aim was to develop an intercultural project based on shared values, methodologies and practices, which, starting from the museum spaces, would support young participants in the exploration of urban space and the creation of “geo-emotional maps” investigating the relationship between individual and territory, private identity and public space.
More in particular, the objectives set for the project were to:
· enhance the accessibility of cultural spaces
· promote the encounter with contemporary art and its creative languages, in order to facilitate participants’ critical understanding of communication codes and the surrounding reality
· further the interaction between individuals with different cultural backgrounds, thereby encouraging new and shared experiences
· develop the museum’s potential as a space for dialogue, strongly committed towards all citizens, by using the cultural heritage as a source of intercultural exchange.

Project description
“City Telling” is one of the 30 pilot projects supported and implemented in the framework of the Grundtvig project “MAP for ID – Museums as Places for Intercultural Dialogue”.
The preliminary phase of the project involved several meetings with operators from social, youth and educational services in the San Donato neighbourhood, educators of the two youth groups involved (Katun and Katun Party), and potential participants.
Once the participants were identified, visits and workshops were held at the museum to promote a first approach to contemporary art languages. These were considered as initial pretexts for an educational experience whose key elements would be personal creativity and a renewed vision of the surrounding world.
Walking tours of the neighbourhood were also organised, during which young participants identified places which held particular significance for them (including schools, sport facilities, parks, urban installations, meeting venues), and shared personal insights and stories. These were collected in a journal comprising photographs, videos and sounds.
The final phase of the project consisted of the implementation of an interactive platform in cooperation with the Sandretto Re Rebaudengo Foundation and the National Museum of Cinema in Turin (see pilot project “Map for Turin”). The interface of this platform (using Google Earth) visualises the mapped city spaces, is accessible to all project participants and may be used both to present the project’s results and to share good practice with other working groups and cultural institutions.

Outcomes
Participants had a totally new experience (most had never been to a museum) and gained familiarity with contemporary art languages. The museum, initially perceived as “a place not for us,” was reconsidered in a new light, so much so that participants decided to return to take part in the implementation of the map.
The museum made a first, important step towards the development of intercultural work both within its walls and in the locality, engaging with a target group traditionally difficult to reach because of age and social background.
The intercultural competencies of staff were enriched by the exchange of different perspectives, methodologies and priorities with social services and youth operators.

Critical points
· in the first phases of “City Telling” the museum, new to this kind of audience, found it difficult to adjust its educational methodologies to the ones employed within youth groups; on the other hand, this had positive consequences as it required a constant monitoring of the project, continually adapted to the needs of participants and their timetables
· the participants were initially wary of being involved with the museum.

Lessons for future projects
· projects like “City Telling” require a longer-term engagement on the part of the museum, in order to allow a better knowledge of the cultural context and of the specific audience it wants to address, and to foster group cohesion
· it is strongly advisable to create opportunities for partner institutions, educators and participants to meet on a regular basis, so that they may know each other better, develop a common language and vision, and build mutual trust.