“Factories of Stories”. Storytelling at the Uffizi Galleries 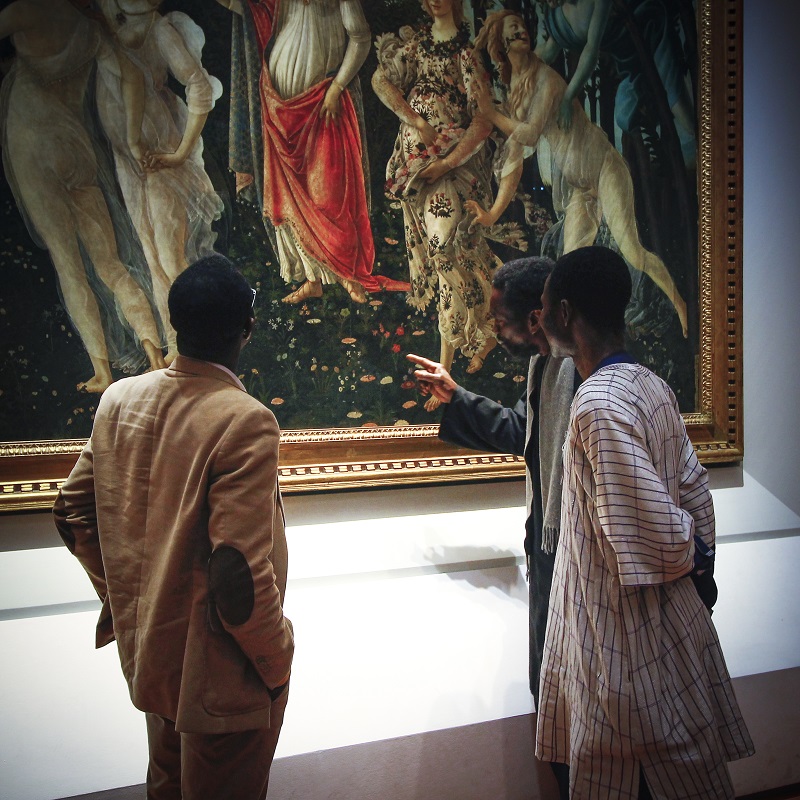 Background
In 2016 a Department for Cultural Mediation and Accessibility was created at the Uffizi Galleries on the initiative of the Director, Eike Schmidt. The aim was to approach and encourage the involvement of “new audiences” and “non-visitors” such as citizens with a migrant background, individuals with disabilities and, more in general, groups with socio-economic vulnerabilities.
The first step for the Uffizi to design a full-fledged project addressing the issue of new citizens’ cultural (non-) participation was to become more familiar with the surrounding communities, by identifying and establishing contacts with local migrants associations, and by involving them in a preliminary activity called “Views from around the world”.
At the same time, “Factories of Stories” was built on the expertise developed by other Italian museums,  namely Brera National Picture Gallery, through projects where the essential cognitive and art-historical contents are interwoven with a strong narrative and autobiographical dimension: drawing inspiration from “Brera: another story” and “#TellMeYourStoryAboutBrera” (see information on the project, excerpts from the narrative trails and short videos on the Heritage of Stories website) – the former project aimed at empowering museum mediators with a migrant background as “new interpreters” of the collections and at creating new intercultural trails, the latter at promoting professional development of Brera educators by providing them with new mediation skills – the Uffizi Galleries deliberately chose to work with a mixed group of storytellers, including both museum staff and new citizens (with no prior experience in museum mediation work, as opposed to the mediators involved in “Brera: another story”), in order to create an audio-trail revolving around 12 artworks of the Uffizi collections, and casting a new light on the museum as an inexhaustible “factory” of stories (the title of the project also paying tribute to the “fabbrica vasariana”).

Funding bodies
Uffizi Galleries’ own budget, plus additional funding from the EU within the framework of the European Year of Cultural Heritage 2018.

Working group
“Factories of Stories” is a project of the Department for Cultural Mediation and Accessibility, curated by two external experts who have developed and tested a particular storytelling methodology over the years in projects such as the above-mentioned “Brera: another story” and “#TellMeYourStoryAboutBrera”, but also “TAM TAM – The Museum for All” at PIME Museum of Peoples and Cultures, or “Twelve storytellers in search of an author” and “My Place / My Texts” at the Gallery of Modern and Contemporary Art in Bergamo.
The group of storytellers is formed by 4 museum operators (3 from the Department for Cultural Mediation and Accessibility, plus one museum guard) and 9 Florence citizens, mostly (but not exclusively) with a migrant background.
Compagnia Teatro dell’Argine was responsible for the recording, editing and post-production of the audio-trail.

Goals
• to promote the access and cultural participation of non-visitors such as citizens with a migrant background, while at the same time providing frequent museum visitors with new insights into the collections: in other words, to help all individuals approach the artworks in a way that involves them personally, regardless of their prior knowledge and cultural consumption patterns
• to go beyond the rationale of “social inclusion” and the goal of “integrating immigrants”, by working towards a “cultural innovation” approach to the interpretation of collections
• to diversify programming through the active involvement of citizens in participatory practices of interpretation and meaning-making
• to promote the professional development of museum staff by providing them with new mediation skills, as well as to encourage a better synergy between educators and curators
• to foster the intercultural and inter-generational contact and exchange between visitors
• to promote a closer relationship between the Uffizi Galleries (a museum extremely overcrowded with tourists and school groups) and Florence citizens, both “old” and “new”.

Target groups
The audio-trail is virtually addressed to all visitors (as well as non-visitors, through its availability on the Uffizi website and major podcasting platforms such as Spotify): young, adult and elderly; Italian and with a migrant background; tourists, frequent visitors and individuals who never set foot in a museum.

Duration of the project
The design and implementation of “Factories of Stories” took place between January 2018 and April 2019; the resulting audio-trail is now part of the permanent cultural offer of the Uffizi Galleries.

Project description
The project was organised in the following phases:

Storytelling workshop (January 2018)
The group of 4 museum operators and 9 citizens went through and intensive training on the use of storytelling techniques inspired by the long established tradition of the Italian “teatro di narrazione”.
It is very important to stress the specificity of this kind of work, tapping into the potential of “storytelling” as a crucial dimension of human relationships (driven by an urgency to share life experiences, feelings, memories, aspirations), and therefore as a universal language which may be understood by everyone, rather than as a performative action or a persuasion strategy.
In this preliminary phase, particular attention was devoted to expanding the participants’ skills of observation, description and an ability to listen (the group as a “sounding board”) through a number of storytelling exercises revolving around personal memories, places, individuals, “objects of affection”.

Choice of the artworks and development of the narrative trails (February-April 2018)
The language of storytelling was subsequently applied to museum collections.
In this specific methodology, choices are always deeply connected not so much with the “cultural backgrounds” of participants, as with the personal memories, insights or feelings triggered by their encounter with the artwork.
Every storyteller chose one, the only restriction to the “eligible” paintings being dictated by a very pragmatic factor: the need to physically circumscribe an area of an otherwise huge museum, where storytellers and future listeners could easily move, work and enjoy the stories. These reflections led the group to identify the exhibition spaces devoted to the fifteenth and early sixteenth century as the museum section on which they would focus.
The development of the narrative trails took place in front of the selected artworks, with storytellers spending hours looking at them, describing them, and starting to interweave art-historical content with a personal tale, under the guidance of the two external experts.
Another key ingredient was the scientific support provided by a curator of the Uffizi Galleries and two scholars from other Florentine cultural institutions. The art-historical accuracy of the narrative trails was intended not so much as a means to retain “content control” on the part of curators, but rather as the only way to genuinely create a “resonance” between the artwork and the storyteller, unattainable by merely using the chosen painting as a pretext. As a matter of fact, many personal details of the stories were directly triggered by the thorough work of observation and description mentioned above, which ended up multiplying the evocative power of collections.
Individual stories all turned out to revolve around universal themes such as family, friendship, prayer and journey, casting a more evocative and personally meaningful light on otherwise “revered” and “distant” Uffizi masterpieces like the “Spring” by Botticelli or the “Virgin and Child with St. Anne” by Masaccio and Masolino.

Editing and final draft of the texts to be recorded for the audio-trail (May-October 2018)
In this phase, storytellers worked both individually (whether in the exhibition spaces or at home) and with the external experts’ support.
Two versions of the stories were created: the integral version (in some cases running as long as 20 minutes) as well as a shorter one (up to 5-7 minutes), more appropriate to listen to during the museum visit.

Recording, editing and post-production of the audio files (October 2018 – March 2019)
Compagnia Teatro dell’Argine was entrusted with the implementation of this phase, due to its expertise in the production of storytelling audio-trails as well as to its long standing work with migrants and refugees.
Great Italian theatre actors (from Marco Paolini to Giulia Lazzarini, from Marco Baliani to Lella Costa and Ottavia Piccolo) have generously given their voice to all storytellers in the Italian version of the stories, while storytellers with a migrant background have recorded their own tale in the respective mother tongues (Arabic, French, Mandarin, Persian and Spanish).

Implementation of the “Factories of Stories” audio-trail (March-April 2019)
The Department of Digital Strategies of the Uffizi Galleries made available the audio files on the museum’s official website as well as on major platforms such as Spotify, Google Podcast, Apple Podcast, Anchor, in an effort to assure maximum exposure and accessibility of the project.
As far as the Uffizi website is concerned, the audio-trail is accessible from three different sections:
• Special Visits: audio files, available in the integral version (both in Italian and in the mother tongue of storytellers with a migrant background) as well as the shorter version
• HyperVisions: high definition images of the artworks and written text of the stories (shorter versions) in Italian, English and the mother tongue of storytellers with a migrant background
• Artworks: high definition of the artworks, short “scientific” description and audio files, accessible only through a specific search by artist/title of the artwork.
A translation in English of the shorter versions of the stories is also available on Spotify (look for “Uffizi | Fabbriche di Storie”).

- of the training and collaborative planning process: a mixed group of "new citizens" and museum operators
- of the narrative audiotrail: young, adult and elderly people, both Italian and with a migrant background; tourists, frequent visitors and non-visitors