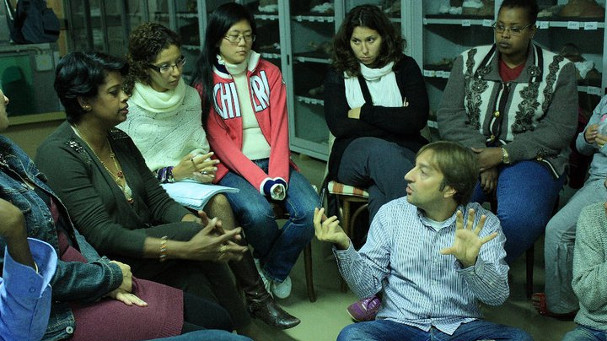 Goals
· to foster mutual knowledge between the Museum and migrant communities living in Biella’s territory
· to explore the museum collections from an intercultural perspective
· to combine the Museum’s educational strategies with the active involvement of local communities through participatory planning.

Target groups
In its first phase, the project was generally aimed at local communities. The final group involved in the participatory planning of the exhibition was formed by 7 migrants of different nationalities. Target audience of the exhibition: adults, families, children.

Project description
Following the Museum’s participation in the training course for Mediators of Intercultural Heritages (see the resulting “narrative trail” at the Museum), and drawing inspiration from the collaborative exhibition “Tongue to Tongue”, jointly promoted one year earlier by the Centre for African Studies and the Museum of Anthropology and Ethnography of the University of Turin, the “Intersections” project was structured as follows:
· introductory meetings at the local CTP: after an overall presentation of the project’s objectives to the students, the museum staff and CTP educators set out to elicit autobiographic story-telling around ideas/concepts closely connected with everyday life (e.g. “name”, “home”, “celebration”), but potentially able to trigger thoughtful reflections on a diverse range of personal and cultural experiences. During the educational activities held in the classroom, migrant students were invited to speak about themselves also with the help of personal objects and/or pictures
· the stories assembled during these introductory meetings were then connected with objects belonging to the museum collections, chosen by project participants as they held, for a variety of reasons, a particular significance for them. Repeated visits to the Museum were organised for small groups, so as to actively engage all CTP students taking part in the project (around 60); during the visits, reflections and intersections between stories and objects emerged, that were subsequently “reworked” by a smaller group of participants involved in the planning and mounting of the final exhibition (see below)
· the final working group, formed by 7 migrant participants with different backgrounds, took part in a number of planning workshops in close cooperation with the museum staff and a cultural anthropologist. The workshops resulted in the mounting of a collaborative exhibition of museum and personal objects, and in the development of “narrative routes” emerged from the intersection of personal biographies and museum objects.
· insights and feelings evoked by the narrative routes were re-interpreted in a performance by the artist Gigi Piana on the occasion of the exhibition opening.

Outcomes
· development of new meanings for the objects preserved in the Museum, no longer exclusively seen as “material evidence” of the local history
· development of a new role for the Museum, through an innovative interpretive strategy and the sharing of objectives by the museum staff and the final working group of CTP students.

- of the participatory planning process:
- of the final exhibition: local communities with a migrant background; students of Centres for Adult Education and Training; adults and families with children