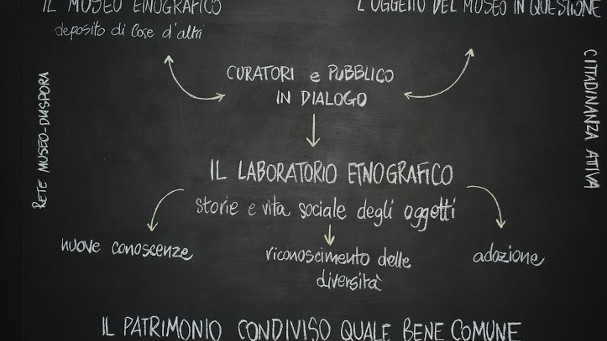 This project description is specifically devoted to the collaborative process initiated by the “Pigorini” Museum in the framework of the European project “READ-ME 2” (Réseau Européen des Associations de Diasporas & Musées dEthnographie).

Goals
• to foster the perception of the museum space as a forum for interaction and dialogue
• to reinforce cooperation between ethnographic museums and diaspora associations, turning the latter from “outsiders” into active players of museum policies
• to actively engage citizens with an immigrant background as a resource to prompt in the regular public a “new” way of seeing museum collections
• to provide diasporas with a platform of interaction and dialogue on the issues of migration and active citizenship through a better knowledge of the role of the museum and the heritage it preserves
• to promote migrant citizens’ cultural productions with a view to encouraging in the museum audience as well as in new generations an acknowledgement of cultural heritage as a vehicle of belonging and peaceful coexistence
• to consolidate the role of the ethnographic museum as a democratic institution which may help reduce social frictions caused by intercultural conflicts.

Duration of the project
From September 2010 to September 2012.
The final exhibition, “[S]oggetti Migranti. People Behind Objects”, and the rich programme of installations and performances that complemented it, ran from October 2012 to July 2013.

Project description
Building on the expertise developed in the framework of “READ-ME” ’s first edition and of “Pigorini” Museum’s previous intercultural project “Saperci fare. Intercultural education and communication at the museum”, “[S]oggetti Migranti” was the final outcome of a long process that evolved in the framework of the European project “READ-ME 2”. The aim of the network was to re-examine the cultural backgrounds of both partner museums and their audiences, with particular attention to the migrant communities involved in the collaborative process. This entailed discussing and re-assessing the contemporary value of ethnographic collections and heritage as cultural products and expressions of the current understanding that individuals and groups have of their own past.

More in particular, “[S]oggetti Migranti” revolved around the “adoption” of museum objects by members of the diaspora associations involved. This allowed them to initiate a process of understanding that entailed incorporating museum pieces into their own identity strategies and take advantage of the creation of an emotional relationship with the objects they had selected.
As project coordinator Vito Lattanzi explains, «it is inspired by collaborative museography that was championed in Italy by Pietro Clemente in The third principle of museography (1999). […] During a lecture course in the late 1990s, Clemente asked his students to think about “objects of affection,” that is the emotions attached to every object. It’s worth looking at this in some detail. The experiment was for the students to display everyday objects from their own lives in a museographic fashion and to use memories, feelings, dreams and personal views. All of this is radically new compared to the rationalist museography […], in which the objects are contextualized according to traditional techniques of identification, scholarship and knowledge. When I came up with the idea “Migrant subjects/objects” I was thinking of this “object of affection” approach. How the object can come to life in the modern world and become of current cultural significance that can be communicated through narrative forms. We can say that from the beginning the spirit of the project belonged to a new school of thought in museology» (see interview with Vito Lattanzi in “Publications / other resources”).

“[S]oggetti Migranti” started in January 2011 and involved the following phases:
• a cycle of focus groups between Museum staff and diaspora associations’ representatives was held on a monthly basis on the themes of cultural heritage and migrant objects (presentation of objects in the Museum warehouses, silent visits to the exhibition spaces followed by a feedback discussion, activation of personal memories and autobiographical approach)
• diaspora associations were invited to “adopt” some of the Museum artefacts, and to present in turn personal “migrant objects”
• the results of this interaction between Museum and diaspora were presented and discussed in a seminar-workshop with the other members of the “READ-ME” network (Rome, January2012)
• Museum staff and diaspora associations representatives co-designed and planned the exhibition “[S]oggetti Migranti. People behind Objects”, resulting from a participative conceptual map and showing the different perspectives of the individuals involved in the project
• through an open call for installations, performances and seminars/meetings, the exhibition was constantly enriched with new voices and narratives.

Lessons to be learned
The project initiated several interesting dynamics:
• the collaborative process created a complex space of dialogue/conflict that allowed the team as a whole to share expertise on the selected objects; those engaged in this collaborative space of possibilities felt actively involved in the Museum’s methods of representation
• by telling the stories of artefacts, migrants had the opportunity to take part in rewriting the meanings of objects, thereby putting the Museum’s goals into a new perspective; shared moments of heritage-making allowed the Museum and diasporic communities to reclaim/rewrite the museological acquisition process, while simultaneously creating the opportunity for a more democratic and inclusive vision of heritage
• furthermore, the adoption of artefacts allowed the project team to initiate a process of understanding in which museum pieces became part of a group identity, by means of creating an emotional relationship with the selected objects
• a variety of methodological perspectives was expressed by those involved in the project, who also gave voice to multiple interpretations of the Museum as an institution; such heterogeneity gave rise to an intense and, at times, quite heated debate, which was a common feature of the working groups set up by each partner museum of the “READ-ME 2” network.

Given its highly experimental nature, the project also presented some rather problematic aspects, related to:
• How diaspora associations look at museums: museums are not always viewed by immigrant communities as places where something useful may be achieved; as a consequence, diaspora associations are still principally concerned with very basic and practical issues of primary support, such as the development of language literacy and the protection of rights. Other problems arise from claims by specific communities: «when considering the African Diaspora», Vito Lattanzi observes, «we found that they reject the idea of the museum as a place to preserve and evaluate their cultural heritage. They still, more or less, regard museums as inappropriate places to house art works that are removed from their natural context. This is especially true for holy objects».
• How museums look at diaspora associations: despite the participative methodology and the efforts to initiate a truly collaborative exchange, the weakness in mediation skills and the difficulty of creating a climate of “togetherness” emerged. This points to a widespread tendency, at least in the museums of the “READ-ME 2” network, to view diaspora associations’ claim to have a curatorial voice as a threat, and therefore to keep «a rigid demarcation line between museum professionals and diaspora members» (for all quotes, see interview with Vito Lattanzi in “Publications / other resources” below).

- of the self-training and participatory planning process: “READ-ME” network of ethnographic museums and diaspora associations
- of the final exhibition: Italian and migrant audience (adults, students from elementary schools to higher education, “second-generation” individuals with an immigrant background, families)