“On the flying carpet” 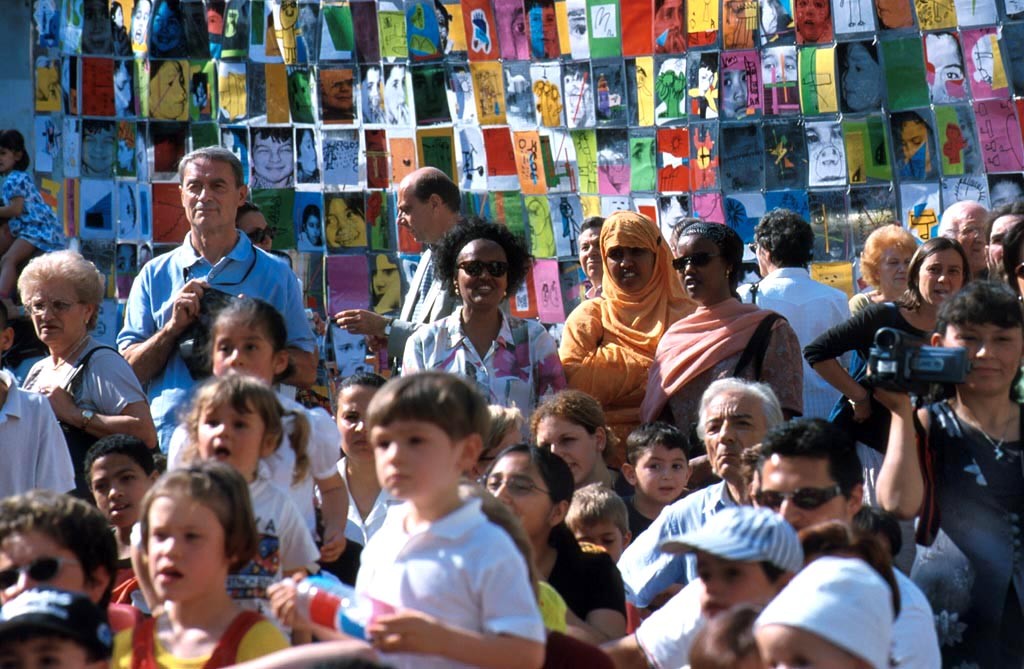 Goals
· to promote conflict resolution and cohesion in multicultural school/neighbourhood contexts, by exploring and experimenting with new forms of communication and personal interaction mediated through contemporary art
· to address communication/cohabitation problems in the neighbourhood at three different levels: among children (of autochthonous and immigrant background); between migrant children and adults (educators, operators, families); among adults
· to promote social inclusion through the direct knowledge of contemporary art (through repeated visits to the museum) and around the concepts of identity and difference.

Target groups
Educators, teachers, students of the schools in San Salvario neighbourhood and their families.

Duration of the project
Started in 1996, and ongoing.

Project description
The project “Around the flying carpet” started in 1996 as a partnership between the “Bay” Nursery School in San Salvario neighbourhood and Castello di Rivoli’s Education Department to address the growing tensions caused by an extremely high percentage of foreign pupils (70% of the nursery school’s population).
In the first three years of the project, a range of activities were carried out at school and in the Museum’s exhibition spaces around the key theme of the carpet (conceived as a real as well as symbolic weaving space).
In 1999, the project was renamed “On the flying carpet” and extended to the whole neighbourhood, with the support of the City of Turin – Department of Education, and Compagnia di San Paolo’s Fondazione per la Scuola, so as to foster cooperation between local schools, associations and agencies. A working committee was appointed, including Castello di Rivoli’s operators, representatives of state and city schools in the neighbourhood, San Salvario’s Local Development Agency, a representative from the Ministry of Education with a specific expertise in intercultural issues, a representative from the University of Turin, the Head of the Education Department – City of Turin, and a group of neighbourhood associations. The committee has been working for three years to establish a wider framework for the project, carry out research on local needs and draft a Neighbourhood Territorial Pact between all actors concerned. The Pact was signed in 2002 with the overall goal of “promoting citizenship, communication and creativity, as well as acknowledging the cultural diversity of San Salvario’s schools”. More specifically, the key objectives of the Pact were to support curriculum delivery and learning in a range of subjects (creative, language and multimedia skills; teaching of English), to promote the activities of local non-school agencies aimed at enhancing school learning, to foster family networks and sociability through the activities of parents’ associations.
In the past decade, activities have been devoted to a different theme each year, including workshops at school and at the Museum, regeneration of playground spaces in the neighbourhood’s schools, performances, exhibitions, interactions with contemporary artists, outdoor festivals, and addressing issues of identity, difference, cohabitation in multicultural spaces.

Lessons to be learned
“Around the flying carpet” gradually evolved from a relatively small temporary project into a long-term strategic programme (“On the flying carpet”), involving an ever growing network of target groups, institutional partners and stakeholders.
For the first time in Italy, the Education Department of a major museum has made itself responsible for a highly conflictual social issue, by contributing, through art and creativity, to the solution of inter-communal tensions in a deprived neighbourhood, and by rethinking the museum as an inclusive space.
The key strength of the project has been to address a social “problem” through cultural tools, using contemporary art languages to challenge stereotypes and to foster communication/interaction between individuals with different cultural backgrounds.

Educators, teachers, students of the schools in San Salvario neighbourhood and their families