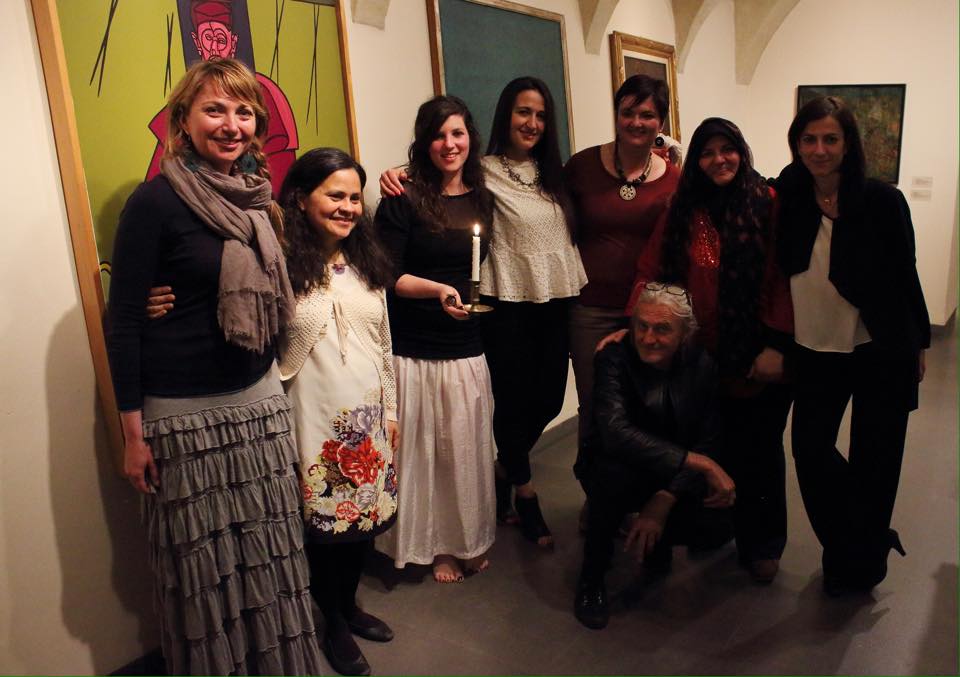 Funding bodies
Fondazione della Comunità Bergamasca (a local community foundation) provided funding for the training course, while GAMeC is paying its Museum Mediators for the guided visits to their respective communities in the year of experimentation following the training course.

Goals
· to promote the Gallery’s active commitment to Art. 27 of the “Universal Declaration of Human Rights”, stating that «everyone has the right freely to participate in the cultural life of the community, to enjoy the arts and to share in scientific advancement and its benefits»
· building upon the experience gathered through the lifelong learning project “Guests of Honour”, to encourage increased levels of awareness and use of the collections on the part of migrant communities, who rarely (if ever) come to visit the museum
· to promote the cultural citizenship of participants, by helping them to become “actors” in the community’s cultural life and in the museum’s effort to become a more open and accessible institution
· to use the museum as a place for integration and mutual knowledge/enrichment
· to use art as a cultural platform for exchange and sharing.

Target groups
– of the traing course: cultural mediators with an immigrant background

– of the museum visits guided by museum mediators: “new citizens” living in Bergamo and its province.

Duration of the project
January – June 2007; a one-year experimentation followed the training course, which allowed museum mediators to become a constant presence and an invaluable workforce at the museum.

Project description
Since 1999, the Education Department has been working at projects specifically aimed at making GAMeC an “accessible” museum for traditionally disadvantaged and marginalised citizens (disabled, migrants, hospitalised children, inmates).
In 2006, the Department further refined the approach of the museum to migrant communities’ consultation and engagement through the lifelong learning project “Guests of Honour”, from which a need to consolidate the relationship between GAMeC and Bergamo’s “new citizens” clearly emerged.
After consultation with a number of cultural mediators and of local agencies dealing with immigration, the Education Department decided to address this need by organising a training course for Museum Mediators, targeted at adult individuals of immigrant background living in Bergamo’s territory. The only prerequisites for admission to the course were a regular residence permit and a good knowledge of the Italian language, while a specific expertise in art history was not necessarily required. Application forms were distributed both through “institutional” (mediators, cooperatives, immigration agencies, community centres…) and “informal” channels (ethnic restaurants and supermarkets, food stalls, phone centres…).
The Gallery was taken by surprise when around 40 people applied. Individual interviews were held to verify the applicants’ language skills, motivations, degree of integration in the respective communities, and opinions regarding the actual prospects of involving fellow migrants in guided visits to the museum once the training course had been completed. To ensure that participants developed a stronger commitment than was the case with the “Guests of Honour” project, GAMeC asked them to pay a 50 euro deposit, which was given back to them at the end of the course on condition that they had attended at least 75% of the lessons.
The course consisted in 12 evening lessons (January – April 2007) held in Italian by the museum education staff and devoted to exploring XX century art through workshop activities, visits to GAMeC permanent and temporary exhibitions, and tours around the city to gain familiarity with Bergamo’s most important modern monuments.
Participants had to pass a final exam (including a written text on the artworks they would have chosen to introduce their communities to the museum, and a guided visit to the permanent collections), after which, in June 2007, they were personally awarded a diploma by Bergamo’s mayor.
The ceremony marked the beginning of a one-year experimentation, during which GAMeC’s new mediators would test their skills “on the ground”; further training would be ensured through participation in ad hoc courses on temporary exhibitions alongside the museum’s guides. In summer 2008, a final evaluation is meant to identify the strengths and weaknesses of the project and to help define the way forward (the idea is not so much to plan a new edition of the training course, as to consolidate the museum’s relationship with its existing mediators).
Today GAMeC is proud to have 31 mediators from 24 countries, who plan and guide visits for their own communities in their mother tongue (admission free, costs of visits charged to GAMeC); since September 2007, hundreds of immigrant individuals have visited the museum’s permanent collections or temporary exhibitions, many of them for the first time in their lives.
Museum mediators also take part in relevant projects undertaken by the Education Department, such as the artist Luca Vitone’s recent installation “Future return” (May 2007), a jigsaw of interviews to Bergamo’s “new citizens” on whether and how they imagine their return home.

Lessons to be learned
Through an initiative deliberately qualified as “cultural” rather than “social”, GAMeC has been able to address some important issues:
· to promote the cultural rights of Bergamo’s immigrant communities
· to reach those “new citizens” for whom the museum is a place of exclusion, or an “invisible” place
· to carry out a more inclusive work with diverse communities, by increasing physical, financial, linguistic, intellectual and emotional access
· to build a long-term relationship with its new audiences
· to develop new insights into the many ways in which its collections may be interpreted.
Among the key factors in the success of the project there is the strong motivation of participants, who saw the training course and the following experimentation as a crucial opportunity to become “actors” in the city’s cultural life, by capitalising on their diversity rather than diluting it.
Museum mediators have become a constant presence and an indispensable interlocutor of the Education Department and its staff; they are acknowledged as a “richness” for the Gallery, whose role is to mediate and advocate between diverse communities and the museum as well as to refocus the interpretation of collections so as to include different cultural perspectives.

- of the traing course: cultural mediators with an immigrant background
- of the museum visits guided by museum mediators: "new citizens" living in Bergamo and its province